Nayib Bukele, dubbed the “CEO of El Salvador,” is pushing the envelope by implementing Bitcoin as a legal tender in the real world. The Salvadoran government is attempting to develop a Bitcoin-backed credit product for micro and small companies around the country.
As a result, small and micro-businesses will be able to qualify for low-interest loans secured by Bitcoin in the near future (BTC).

During a recent Facebook Live Audio discussion titled “Bitcoin loans with lower interest rates,” Monica Taher, an advisor for the government of El Salvador, stated that the next step in El Salvador’s Bitcoin agenda was to use the benchmark cryptocurrency to provide low-interest loans to small and micro-businesses.
The government advisor, Mónica Taher said:

“The Bitcoin small loans will provide access to digital money for the unbanked while helping them create a credit history. El Salvador’s economy will strengthen by empowering its small businesses.”

The execution of loans, according to Paul Steiner, president of CONAMYPE (the national institute for small and micro-businesses), will function with the government-created El Chivo wallet. El Chivo, the official Bitcoin and USD wallet of the Government of El Salvador, has seen a rapid increase in use.
In less than four months since its inception, it has amassed more over 60 percent of the country’s total population. 4 million people out of a population of 6.5 million (including persons under the age of 18 who are ineligible to use the wallet) are already using it.
El Salvador’s business landscape is dominated by small and micro-businesses, and Bitcoin-backed loans offer a chance to change that. Steiner demonstrated:
“El Salvador has roughly 1.2 million businesses in the country. Roughly 66% are micro-businesses or ‘subsistence’ businesses. Over 90% of micro-businesses are self-funded via informal loans or loan sharks.”
As an example, Steiner says that it was common for loan sharks and informal lenders to demand up to $15 in daily interest for a $100 loan that was to be repaid in 20 days. These entrepreneurs’ life would be considerably improved by Bitcoin-backed low-interest loans, which would serve as “an entry point for financing.”

Andrea Mara Gómez, project manager for Acumen, a decentralized finance (DeFi) lending system, stated that “some crypto enthusiasts in El Salvador are already using crypto solutions such as DeFi because they offer ease of use and a higher interest rate than banks.”
Alessandro Cecere, one of Ledn’s Community Managers, was also present during the discussion about BTC loans. Ledn pioneered BTC-guaranteed mortgages. His query, though, was if El Salvador would follow their pattern and use Bitcoin as mortgage security in the future.
According to the report, Steiner was open to discussion and optimistic about the future of Bitcoin and the cryptocurrency business. His primary goal is to improve the business environment for small and medium-sized businesses (SMEs).
El Salvador’s president, Nayib Bukele, has predicted that at least two more countries will embrace Bitcoin as legal tender this year, and he may be striving to see this prediction come true. He recently announced that he would be meeting with Turkey’s President, Recep Tayyip Erdogan. Turkey has expressed interest in adopting Bitcoin in order to help the country overcome its enormous present inflation. Erdogan recently announced that a measure to regulate cryptocurrencies was on its way to the country’s legislature. The law aims to change the country’s present crypto legislation and pave the way for Bitcoin adoption.
Bank Account, Crypto, Cryptocurrencies, Investment, Investors News, NFT, Uncategorized
by Mycryptobank January 23, 2022
Twitter launches verified NFT profile picture feature 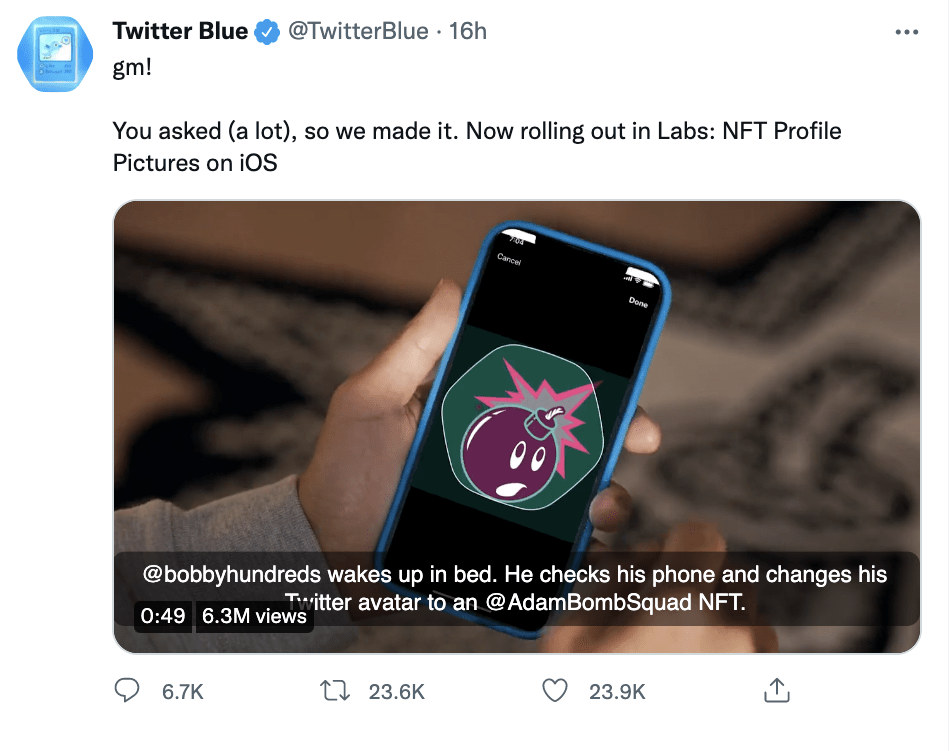